Here's a further batch of books received by the Journal of Intellectual Property Law & Practice for review.  If you would like to review one of these titles, please email Sarah Harris of Oxford University Press at sarah.harris@oup.com and let her know, by not later than close of play on Monday 2 February.  If you are not already known to the journal, do let us know why you think you are particularly qualified to review the book.

The books on offer are as follows:

This insightful study explores the constitutional, institutional, and cultural barriers to harmonisation of the copyright laws of the United States and the European Union. It considers these matters in the real world transnational environment in which copyright law operates and suggests that the reality transcends the differences, offering a framework for meaningful harmonisation.

The authors examine in detail and offer a critique of the sporadic and historic attempts at one or another form of harmonisation, via treaty and otherwise, from the creation of a minimal standards regime to the proliferation of substantive treaties. They similarly examine the respective competencies of the US and the EU to adopt a transnational regime, and propose a workable framework consistent with these competencies. 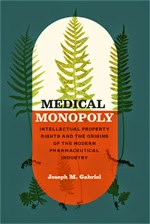 During much of the nineteenth century, physicians and pharmacists alike considered medical patenting and the use of trademarks by drug manufacturers unethical forms of monopoly; physicians who prescribed patented drugs could be, and were, ostracized from the medical community. In the decades following the Civil War, however, complex changes in patent and trademark law intersected with the changing sensibilities of both physicians and pharmacists to make intellectual property rights in drug manufacturing scientifically and ethically legitimate. By World War I, patented and trademarked drugs had become essential to the practice of good medicine, aiding in the rise of the American pharmaceutical industry and forever altering the course of medicine.

Peter Baldwin explains why the copyright wars have always been driven by a fundamental tension. Should copyright assure authors and rights holders lasting claims, much like conventional property rights, as in Continental Europe? Or should copyright be primarily concerned with giving consumers cheap and easy access to a shared culture, as in Britain and America? The Copyright Wars describes how the Continental approach triumphed, dramatically increasing the claims of rights holders. The book also tells the widely forgotten story of how America went from being a leading copyright opponent and pirate in the eighteenth and nineteenth centuries to become the world’s intellectual property policeman in the late twentieth. As it became a net cultural exporter and its content industries saw their advantage in the Continental ideology of strong authors’ rights, the United States reversed position on copyright, weakening its commitment to the ideal of universal enlightenment—a history that reveals that today’s open-access advocates are heirs of a venerable American tradition.

Further information about this title can be obtained from the book's web page here
Posted by Jeremy at Wednesday, January 28, 2015