The Rubik’s Cube to lose its shape mark protection

In our latest issue, Joel Smith and Sarah Burke (Herbert Smith Freehills LLP) discuss the recent decision of the CJEU in Case C-30/15 P Simba Toys GmbH & Co. KG v EUIPO, concerning invalidity challenges brought against the registration of the Rubik's cube as Community trade mark (now EU TM) no. 000162784. The General Court, in Case T-450/09, had upheld the EUIPO's decisions (Cancellation Division here and Board of Appeal here) to dismiss the application for a declaration of invalidity. The CJEU, however, decided to set aside the judgment of the General Court, ruling that the application of Article 7(1)(e)(ii) of Regulation 40/94 (applicable here due to the timeframe of the facts in question) requires an assessment of the essential characteristics of a shape in light of the technical function of the actual goods concerned.


The Rubik’s Cube to lose its shape mark protection

In its decision on 10 November 2016, the Court of Justice of the European Union set aside the judgment of the General Court and annulled the European Union Intellectual Property Office’s (EUIPO) decision allowing registration of the 3D shape of a Rubik’s Cube as a trade mark; non-visible functional elements such as the Cube’s rotating ability should have been taken into account by the EUIPO and the General Court in deciding whether registration should be allowed.

Simba Toys sought to invalidate the Rubik’s Cube shape mark under various grounds within Council Regulation 40/94 (the Regulation) and the Community Trade Mark Regulation 207/2009: OJ 1994 L 11, p.1 (CTMR). Whilst the Regulation was replaced by the CTMR, the invalidity action started before it came into effect so Regulation 40/94: OJ 2009 L 78, p.1 is the relevant Regulation for the purposes of this case.

As the Court of Justice of the European Union (CJEU) upheld Simba Toy’s first ground of appeal in relation to Article 7(i)(e)(ii) of the Regulation, it did not consider the other grounds of appeal as advanced by Simba Toys, so the CJEU only considered arguments relating to the technical result of a shape.

The Rubik’s Cube is one of the best-selling toys of all time. In 1999, Seven Towns Ltd registered the following depiction of the Rubik’s Cube as a European Union Trade Mark (EUTM) in class 26 for ‘three-dimensional puzzles’: 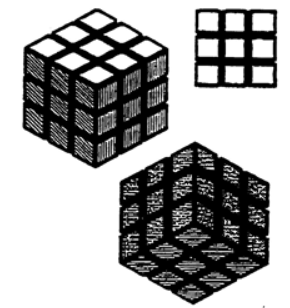 In 2006, Simba Toys filed a declaration of invalidity with the European Union Intellectual Property Office (EUIPO) (formerly Office for Harmonization in the Internal Market, OHIM), which was rejected by the cancellation division in 2008. An appeal was lodged by Simba Toys in 2008, but this was dismissed by the Second Board of Appeal in 2009. Simba Toys appealed to the General Court seeking annulment of the Board of Appeal’s decision. The General Court dismissed the cancellation action in November 2014, ruling that the Rubik’s Cube can be validly registered as a shape mark as the way in which the mark is graphically represented does not involve a technical solution. Simba Toys appealed. In May 2016, Advocate General Szpunar provided his Opinion (Simba Toys GmbH & Co. KG v EUIPO, C-30/15 P, EU:C:2016:350) and, finally, in November 2016 the CJEU handed down its judgment.

Trade mark law constitutes an essential element in the system of competition in the EU and part of that system is that: (1) undertakings must be able to register trade marks in order to attract customers, and (2) trade marks shall enable consumers to distinguish the relevant undertaking’s goods and services from others which have a different origin. However, the purpose of Article 7(1)(e)(ii) of the Regulation is to prevent trade mark law from granting anyone a monopoly on technical solutions or functional characteristics of a product.

Citing its previous judgment in Lego Juris A/S v OHIM and Mega Brands, Inc (C-48/09 P, EU:C:2010:516), the CJEU stated that ‘correct application of that provision requires that the essential characteristics of the three-dimensional sign at issue be properly identified’ (para 40). The General Court had previously found that the grid structure on each surface of the Cube at issue did not perform any technical function since the fact that the structure had the effect of visually dividing each surface of the cube into nine equal squares could not constitute a technical function for the purposes of the relevant case law.

The CJEU disagreed with this finding. In order to analyse the functionality of a sign for the purposes of Article 7(i)(e)(ii) of the Regulation (which concerns only signs which consist of the shape of the actual goods), the essential characteristics of the shape must be assessed in the light of the technical function of the actual goods concerned (citing Lego Juris v OHIM). The General Court should have defined the technical function of the actual goods (ie a 3D puzzle) and should have taken this into account when assessing functionality of the essential characteristics of that sign. Accordingly, the General Court had interpreted the criteria for assessing Article 7(1)(e)(ii) too narrowly. The competent authority must carry out a detailed examination that takes into account material relevant to defining the essential characteristics of a sign in addition to the graphic representation and any descriptions filed at the time of the trade mark application.

Contrary to what the General Court had found, the CJEU held that ‘the essential characteristics of a shape must be assessed in the light of the technical function of the actual goods concerned’ (para. 46). As such, the General Court should have taken non-visible elements of the graphic representation of the Rubik’s Cube into consideration, including the rotating capability of the individual elements in the Rubik’s Cube 3D puzzle. It was irrelevant that the trade mark application as filed did not mention rotating capability. The court was still entitled to take these functions into account. As the General Court had erred in law, the CJEU annulled its decision on the ground of infringement of Article 7(1)(e)(ii) of the Regulation.

Whilst the EUIPO will have to re-assess its decision on the validity of the trade mark in due course, it seems highly unlikely that it will allow the mark to remain on the trade marks register in light of the CJEU’s judgment on technical result.

Following this decision, life will not be any easier for brand owners wishing to protect shapes as trade marks: this case follows a line of case law (including the ‘KitKat’ decision in Société des Produits Nestlé SAv Cadbury UK Ltd, C-215/14, EU:C:2015:604, in 2016), which makes it clear that shape marks are very difficult to obtain and keep.

In this case, the CJEU looked beyond the graphic representation of the trade mark and considered the Cube’s invisible technical qualities. It does not matter if the graphical representation of a trade mark does not specifically show a technical function—a competent authority is still entitled to consider how the mark as depicted might function as a shape in real life and this makes it more likely to fall within the Article 7(1)(e) exclusions to registration for shape marks. This decision may well make registry proceedings involving shape marks more complicated as it is clear that invisible features of the sign and/or evidence of how the shape is used in practice may come into play in deciding whether to allow registration of the sign at hand.

Public policy considerations will always be paramount with shape marks. This is so because a shape mark is a very powerful right which can offer a perpetual monopoly. From this perspective, the decision is perhaps not altogether surprising. The Rubik’s Cube was previously protected by a patent and although this was not taken into consideration by the CJEU, it is of course possible to draw analogies with the Lego Juris vOHIM case, where the Lego brick was refused protection as a shape mark with one of the reasons being that it had previously enjoyed patent protection.

Whilst third parties will now be able to manufacture and sell puzzles in this same shape, the decision does not mean that third parties can now freely copy the Rubik’s Cube: other forms of IP protection might be available. Indeed, in a statement following the judgment, the owners of the Rubik’s Cube have stated that ‘the Rubik Brand is fortunate in having other trademarks, copyright, passing off and unfair competition protection to rely on which will continue to ensure its exclusivity’ (The Guardian, 10 November 2016).

© The Author(s) 2017. Published by Oxford University Press. All rights reserved.