Is Louboutin’s red sole mark (shown below) a position mark, a colour mark or a shape mark? 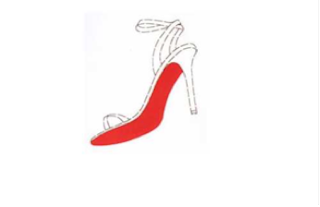 Louboutin sued Dutch footwear retailer, Van Haren, for infringing the Benelux registration of its red sole mark by selling high-heeled women’s shoes with red soles.  In response, Van Haren contended the red sole mark was invalid since it was a 2D mark in which the colour red, when applied to the soles of shoes, conformed to the shape of the shoes, thereby giving them substantial value.

The District Court of The Hague, Netherlands is now seeking guidance from the Court of Justice of the European Union (CJEU) on whether the notion of ‘shape’ pursuant to the absolute ground for refusal or invalidity under Article 3(1)(e)(iii) of the Trade Mark Directive (2008/95/EC), which concerns signs consisting exclusively of the shape which gives substantial value to the goods, includes non-3D properties of the goods such as their colour.

According to the AG, Louboutin’s red sole mark is neither a position mark nor a colour mark but a shape mark, specifically “a mark consisting of the shape of the goods and seeking protection for a colour in relation to that shape.”  Accordingly, Louboutin’s red sole mark potentially falls within the prohibition under Article 3(1)(e)(iii).  However, as the AG pointed out, the concept of shape which “gives substantial value” relates only to the intrinsic value of the shape and not to the reputation of the mark or its owner.
To overcome the prohibition under Article 3(1)(e)(iii), Louboutin will need to prove that the attractiveness of its red-soled high heels arises from the reputation of its red sole mark or as the owner of that mark and not from the intrinsic value of the shape.  On the face of it, that should not be too difficult since it is because consumers are head over heels for Louboutin’s red-soled high heels that competitors have created their own copycat versions.
Let’s however wait to hear what the CJEU says.

[This is an Authors' Take post, which provides readers with an insight into current IP scholarship, featuring preliminary comments and thoughts from authors of articles accepted for publication in forthcoming issues of the Journal of Intellectual Property Law & Practice (OUP).]
Posted by Eleonora Rosati at Monday, August 21, 2017