On 10 June 2020, the EU General Court rendered a decision (Louis Vuitton Malletier v EUIPO, T-105/19) which could open the door to trade mark protection of Louis Vuitton famous “Damier Azur”. The case dates back to 2015 when a Polish man challenged successfully before the EUIPO the international registration of this sign by Louis Vuitton Malletier (No 986207) for goods in Class 18: 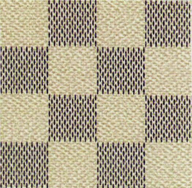 In a nutshell, the Court annulled the decision of the Board of Appeal. It first held that it was a well-known fact that the chequerboard pattern has always existed in decorative arts and that the Damier Azur pattern did not depart significantly from the norms and customs of the sector. It concluded that it had no inherent distinctive character. Nevertheless, the Court considered that it cannot be excluded that this pattern could have acquired distinctiveness through use in the EU and that the Board of Appeal had failed to examine all the evidence relating to the use of the mark at issue. Interestingly, the General Court underlined that not having physical shops in some Members States does not necessarily prevent the relevant public from becoming familiar with and recognizing the mark in question.

It is therefore a mixed decision for the French fashion house. At the same time, it illustrates how it can be problematic to protect iconic patterns under European trade mark law and could also pave the way for more pragmatism concerning the acquisition of distinctive character of EU trade mark.

This contribution exposes the context of this case and its practical implications, which remain to be confirmed. In particular, it analyses, in a critical way, the consequences of admitting a broad definition of well-known facts and the difficulty for EU trade mark holders to prove the acquisition of distinctiveness. It expresses hope that this decision will help to strike a more balanced system concerning, at least, this last issue.
[This is an Authors' Take post, which provides readers with an insight into current IP scholarship, featuring preliminary comments and thoughts from authors of articles accepted for publication in forthcoming issues of the Journal of Intellectual Property Law & Practice (OUP). The full text of this contribution will be made available on Advance Access soon]
Posted by Eleonora Rosati at Monday, August 10, 2020