The Court of Appeal has upheld a patent relating to aircraft seating systems, giving useful guidance on the expected level of knowledge of patent law of the notional skilled reader.

Patents are drafted in a particular manner, using various conventions which may not be readily apparent to the lay reader. This decision confirms that the notional skilled reader (the hypothetical addressee of a patent) is deemed not only to have knowledge of the technical field covered by a patent but also of patent drafting conventions, and of the concept of parent and divisional patent applications. 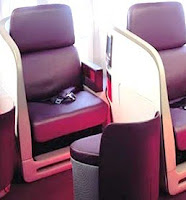 Virgin commissioned Contour to manufacture seats for its Upper Class cabins. Subsequently, Virgin alleged that the seats made by Contour for other clients infringed Virgin's patent and unregistered design rights in the seats made for it by Contour.

The patent, a divisional, sought to optimize and utilize space behind the seat, referred to as ‘lost space’. Virgin contended that, on their proper construction, the words of claim 1 of the patent simply required that, as well as having elements that could form a seat, each seat unit also had elements which could form a substantially flat bed, and that there was no requirement that the elements forming the bed should be completely distinct from the elements forming the seat.

Mr Justice Lewison concluded that the patent was valid, but was limited to the ‘true bed meaning’ and therefore was not infringed by Contour's designs. He also held that, as Contour's seats had been independently designed without copying those made for Virgin, there was no infringement of Virgin's unregistered design rights. He added that, if the patent were to be construed in the manner which Virgin contended, which would encompass Contour's design, the patent would be invalid for added matter. He rejected all other attacks on the patent.

Virgin appealed against the finding of non-infringement of the patent, and Contour cross-appealed on the contingent basis that, if the patent was infringed, it was invalid.

The Court of Appeal reversed the Patents Court's decision that the patent was not infringed, and affirmed its validity.

The Court of Appeal agreed with Virgin that the focus of the claim was on maximizing length by using lost space behind the seat, regardless of whether the seat flipped, as there was nothing in the claim limiting it in that way. Accordingly, the claim was not limited to flip-over seating and was infringed by Contour's design.

The Court of Appeal also gave guidance on what a skilled reader of a patent might be expected to know about patent law and drafting conventions. As well as the contention of added matter in a divisional application over the parent application, the arguments on validity included points about reference numerals in claims, and also on the use of two-part patent claims, including pre-characterizing and characterizing parts.

Applying the House of Lords decision in Kirin-Amgen Inc. v Transkaryotic Therapies Inc. (No. 2) [2004] UKHL 46, the Court of Appeal stated that it would be unrealistic to expect that the notional skilled reader would not know and take into account the explicit drafting conventions by which a patent and its claims were framed. Thus the skilled reader would know of Rule 29(7) of the Implementing Regulations to the EPC, which states that reference numerals shall not be construed as limiting the claim, and of Rule 29(1), which sets out the convention for two-part claims and under which the skilled reader would recognize the pre-characterizing part of a claim as denoting those matters which the patentee considers to be old. Likewise, when there is a reference to a patent being a divisional application, it would be perverse to work on the basis that the skilled reader would not know what that meant. A real skilled reader who was not familiar with such concepts would take steps to find out their significance.

The comments made by the Court of Appeal on the level of knowledge of patent law and drafting conventions ascribed to the notional skilled reader are a useful guide to the interpretation of patent claims, as they reinforce the notion that the skilled reader is deemed to be familiar with patents themselves as well as the relevant technical knowledge. The Court of Appeal decision includes the following quote from Lord Hoffmann in Kirin-Amgen: ‘ ... The words [in a patent claim] will usually have been chosen on skilled advice.’ The judgment reinforces the fact that such skilled advice is not to be ignored when interpreting patent claims.
Posted by Jeremy at Tuesday, January 12, 2010