The Harju County Court in Estonia has dismissed an action filed by Tallinna Lennujaam AS requesting the transfer of the domain name ‘lennujaam.ee’ (airport.ee), registered in the name of M&A AS.

The rules of the Estonian Domain Disputes Committee regulate claims for handing a domain name over to an applicant, but an action can still be based on regulations provided in the Trade Marks Act regarding the infringement of trade mark rights.

The Supreme Court in Estonia found in its Decision 3-2-1-4-06 that the legal protection of the owner of a registered trade mark is derived from Article 14(1) of the Trade Marks Act, according to which the proprietor of a trade mark has the right to prohibit third parties from using similar signs in domain names in the course of trade.

Tallinna Lennujaam AS (Tallinn Airport Ltd) operates and develops airports belonging to the company which are located in Estonia, including Tallinn Airport. On 29 March 2009, Tallinn Airport was named after Lennart Meri, the president of the Republic of Estonia from 1992 to 2001. Lennart Meri, the first president of the newly independent Estonia, had become a national legend whose character and heritage symbolized statesmanship as well as national pride and the arrival of Estonia on the world stage.

The plaintiff affirmed that LENNART MERI TALLINNA LENNUJAAM was a well-known trade mark because the majority of the Estonian population who used the services provided by Tallinn Airport Ltd did so by identifying the ‘lennujaam’ (‘airport’) as LENNART MERI TALLINNA LENNUJAAM. There was thus a likelihood of confusion on the part of the public as many customers had been confused by believing that the website ‘lennujaam.ee’ belonged to Tallinn Airport. Further, the plaintiff contended that the domain name was confusingly similar to the business name Tallinna Lennujaam AS. The plaintiff declared that the domain name ‘lennujaam.ee’ in the defendant's name damaged the reputation of the well-known trade mark LENNART MERI TALLINNA LENNUJAAM and misled the average consumer by giving the impression that there was a commercial connection between the plaintiff and the defendant.

On 13 September 2007 the domain name ‘lennujaam.ee’ was registered in the name of AS M&A (defendant), a sole shareholder of Baltic Tours AS, one of the oldest travel agencies in Estonia. The domain name was used by Baltic Tours AS to sell holidays, business trips, and flight tickets, including tickets for flights from Tallinn Airport.

The defendant argued that there was no likelihood of confusion, because the data of the service provider had been indicated on the website and, moreover, the defendant had been active in a different field of commercial activity (booking and selling of flight tickets) to the plaintiff (airport operating and providing aerial navigation services). 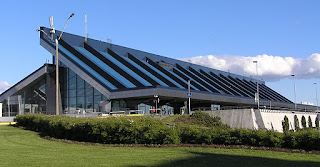 According to the defendant, the statement about LENNART MERI TALLINNA LENNUJAAM being a well-known trade mark was unsubstantiated, considering the fact that Tallinn Airport had only borne the name of Lennart Meri for less than one year, so it could not rule out that the name combination had not yet become well known. Further, the defendant pointed out that the plaintiff had not even determined the extent of legal protection of the putative well-known trade mark. The domain name ‘lennujaam.ee’ was neither identical nor confusingly similar to the trade mark LENNART MERI TALLINNA LENNUJAAM. The defendant declared that the domain name ‘lennujaam.ee’ referred to the characteristics of the services provided on that website and had become customary in good faith business practice. The defendant added that the plaintiff had no right to prohibit the third parties from using the word ‘lennujaam’ (‘airport’) due to its descriptive character.

The defendant claimed that the plaintiff had acted in bad faith by filing the action three years later than the date on which the plaintiff became aware of the alleged infringement of its rights by jeopardizing the investments made for using the domain name ‘lennujaam.ee’ and causing the defendant significant and unjustified costs in connection with the civil action.

The judge, having taken into account previous court practice and special literature in the field of trade marks and domain names, concluded that a domain name can have a similar purpose to a trade mark because of its distinguishing, descriptive, and advertising characteristics on the internet. Accordingly, the determination of the extent of legal protection of a domain name should be guided by the Trade Marks Act.

Although, during the hearing, the judge explained to the plaintiff that the relevant evidence should be submitted in order to prove the fact that it was a well-known trade mark, the plaintiff continued to plead that a fact which the court should deem to be a matter of common knowledge did not need to be proved—thus the trade mark LENNART MERI TALLINNA LENNUJAAM should be declared well known without submitting any evidence in support of that proposition. The judge declared that, for the purpose of recognizing a trade mark as being well known, the duration and extent of the use should be taken into consideration and the realization of reputation cannot take place in such a short time. Therefore, the judge did not recognize LENNART MERI TALLINNA LENNUJAAM as being a well-known mark.

The judge noted that, even if the trade mark LENNART MERI TALLINNA LENNUJAAM had been well known, the likelihood of confusion between the trade mark and the domain name was not identified. The judge emphasized that the word ‘lennujaam’ (airport) is customary in the current language and should be free to use, so the plaintiff was not allowed to monopolize the word ‘airport’. Further, the word ‘lennujaam’ is an element of the trade mark LENNART MERI TALLINNA LENNUJAAM which is not subject to protection.

The ‘lennujaam.ee’ case illustrates that the registration of a pertinent and memorable domain name can give a good advantage in business activity. The implementation of such action would have created the situation where the airport operator could interfere in other companies' economic activities by monopolizing the word ‘airport’. If the judge had agreed with the plaintiff's claim that the domain name ‘lennujaam.ee’ infringed its right to its business name Tallinn Airport Ltd, this kind of interpretation would have been unreasonable and contrary to the meaning of regulation of the exclusive right of the trade name.

The dismissal of the action shows that the exclusive right of the well-known trade mark owner is still restricted by such goods and services with which the trade mark became well known and that the scope of legal protection is based on the form of the trade mark in which it became well known. The decision also shows the importance of submitting the relevant evidence during the proceedings.
Posted by Jeremy at Friday, January 27, 2012