The Journal of Intellectual Property Law & Practice (JIPLP) is offering four further books for review.  As usual, offers are invited from prospective suitably-qualified reviewers.  If you would like to review one of these titles, please email Sarah Harris at sarah.harris@oup.com by not later than Thursday 31 January and let her know.  If you are not already a contributor to JIPLP and have not previously reviewed a title for us, can you please attach your CV or give a brief explanation as to why you feel entitled to review the book in question.

The books now offered are as follows:


"This detailed and concise book surveys the international genetic resources laws applying in Antarctica, space, the oceans and seas, the lands, and the airspaces above land and water.

The well-structured analysis traces the evolution of these various schemes and their contributions to the comprehensive arrangements under the Convention on Biological Diversity, the International Treaty on Plant Genetic Resources for Food and Agriculture and the World Health Organization’s PIP Framework. The book details the different avenues and concluded positions, documenting a laboratory of legal approaches and possibilities.

Regulating Genetic Resources will be a valuable addition to academics, governments, NGOs and students in environmental and intellectual property law". 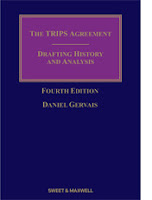 "The most significant change is the addition of four early versions of the TRIPS text in the article-by-article analysis in Part II, with underline and strike-through to show the changes, which chart the evolution of the final text of the Agreement


"Trade Dress: Evolution, Strategy, and Practice analyzes the differences between the two major types of trade dress - product configuration and product packaging - describes the standards of proof for each, and explains how these standards have been interpreted (and in some cases misinterpreted) by the federal courts. The book also reviews the evolution of trade dress in the United States and its recent emergence as an enforcement alternative. Finally, it offers practical suggestions on how best to utilize trade dress rights in protecting a client's intellectual property".


"Claim construction is a major phase of a patent litigation where the meaning and scope of the claims themselves - the invention - is determined by the court. The outcome of this definition phase is crucial to the respective infringement and invalidity positions of the parties. The Thesaurus of Claim Construction directs practitioners to cases-and in contrast to searches on more general electronic databases, only those cases-in which claim terms have previously been construed, and further to the sources of the evidence used by past courts to construe the terms in dispute.

This two-volume Second Edition is updated to include over 3,500 additional entries, some of which focus on Biotechnology, Pharmacology, and Cleantech. Ordinary Skill is now included as a topic".