JIPLP welcomes Julia Montero to the Editorial Board 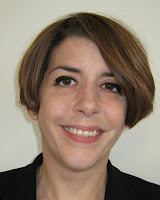 JIPLIP Editorial Board members are appointed for a renewable three-year term; they are divided into panels that reflect to some extent their personal interests or experiences within intellectual property -- though they are never bound to contribute ideas and content from solely within the sphere of subject-matter of the panel to which they have been allocated.

The appointment of new Editorial Board member Julia Montero gives this weblog an ideal opportunity to introduce readers to her and, in doing so, to welcome some further input from the in-house perspective. The blog asked Julia to say a few words about herself and she duly obliged. Says Julia:

"I’m a UK-based solicitor currently working on the converged Internet side of Vodafone Group’s products and services in London. I’m also a member of BLACA and SCL, a published author and a former Visiting Professor at the University of Alicante. Prior to qualifying at media firm Michael Simkins LLP and having obtained an LL.M in IP/Computer law (University of London 1999), I spent 4 years developing collective online music licensing at the UK collecting society, MCPS/PRS (now ‘PRS for Music’). I have also worked in-house for EMI Records and Abbey Road Studios advising on digital music, branding and associated commercial issues.

I’ve been particularly interested in the intersection between digital technologies and media since first reading John Perry Barlow’s seminal article ‘The Economy of Ideas’ as an undergraduate. Some 10 years later, IP practitioners in all jurisdictions are still wrestling with many of the legal challenges raised by the exploitation of IP rights across digital platforms. I’m therefore extremely honoured to be joining such a prestigious Editorial team and very much looking forward to contributing to the reporting and analysis of the development of such issues (amongst others!) while on the Transactions and Non-Contentious IP Practice Board".

A full list of the Editorial Board teams can be found here.
Posted by Jeremy at Monday, November 30, 2009

Email ThisBlogThis!Share to TwitterShare to FacebookShare to Pinterest
Labels: New Editorial Board member