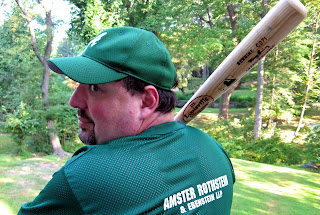 In this, the first in an occasional series of features on contributors to JIPLP, we introduce Charles R. Macedo (partner at Amster, Rothstein & Ebenstein LLP). Apart from authoring numerous Current Intelligence pieces and being something of a public speaker, Charley is author of The Corporate Insider's Guide to US Patent Practice (published by OUP, here) and also writes for other publications.

So what sort of man is Charley?  When he is not off being a lawyer, he is at home in the suburbs of New York City with his wife and two sons. He loves to read series books that let him watch the characters develop and grow, whether it be Harry Potter, Percy Jackson, Mitch Rapp, or Ethan Gage. Having an educational background in Physics and History (in addition to Law), Charley also enjoys reading science fiction and historical novels.

On most weekends when school is in session, Charley can be found on the baseball field, soccer field, or basketball court coaching children with special needs. During the school year, he also donates time to teach high school seniors in New York City about patents and works with them on writing their own patent applications.

One reason why Charley writes so many articles and makes so many presentations is that he simply loves it. Many a weeken,d when he wakes up early in the morning he can be found in front of his computer writing another CI or Guest Column, or preparing a presentation to explain complex concepts in an easy-to-understand manner. He thinks of himself as an interpreter who is fluent in many different languages -- technical jargon spoken by inventors/clients, patentese spoken at the PTO, legalese spoken by courts and attorneys, business jargon (like ROI) spoken by suits and, most importantly, plain English (the American variety) spoken by the rest of us. His writings often seek to translate the complex legal principles of today's intellectual property law into the vernacular for the public to read and appreciate.

Over the past two decades since Charley graduated from law school, and almost three decades since he first started working in the intellectual property law field, he has witnessed the field of patent law grow and to some extent wane with the Federal Circuit. He has seen the development by the Regan, Bush Sr. and Clinton Administrations of domestic and international policies which focused on strengthening intellectual property protection in the US and around the world, with the concomitant growth in value of such protection. During George W's years, failings in the system began to emerge, the PTO got overwhelmed, the courts were challenged on how to value the merit of intellectual property protection, and the press criticized particular patents such as how to make a crustless peanut butter and jelly sandwich, a method of swinging on a swing, and a method for purchasing books at Amazon.com with one click, which sold a lot of papers. The US Supreme Court suddenly started to second guess decades of jurisprudence on patent law that came out of the Federal Circuit, and murky lines of jurisprudence began to be redeveloped on issues like when an invention is obvious, when an injunction should issue, who can bring a declaratory junction action and what types of processes are patent-eligible, etc.

Over the next ten years, Charley thinks the law in the US will need to grow to recognize that good patents are a good thing that should be upheld and reasonably valued, while bad patents are a bad thing that should not. While bright line rules that the Federal Circuit has been developing have provided greater predictability for the PTO and patent users, the US Supreme Court's interventions have eschewed such rules, and will likely continue to do so in the future, resulting in vaguer standards that are reminiscent of "I know it when I see it" tests famously applied in First Amendment pornography cases.

To learn more about Charley's professional background click here.  To contact him directly, whether to discuss intellectual property law questions or coaching techniques for children with special needs, you can email him here.
Posted by Jeremy at Tuesday, September 07, 2010