Earlier this year, JIPLP published a Current Intelligence note by Thorsten Lauterbach, "Copyright: A narrow defeat is still a defeat: integrity clipped before its best-before date" (Journal of Intellectual Property Law & Practice (2011) 6(6): 371-373; doi:10.1093/jiplp/jpr024). According to the abstract:


"The Stuttgart Higher Regional Court in Germany, balancing the right of integrity under copyright attributed to the architect of a work of architecture and the right to property held by the owner of the building, recently found against the grandson of Paul Bonatz, the architect of the Stuttgart terminus rail station and in favour of Deutsche Bahn AG, which sought to demolish part of that station during the construction of a new underground station.".

Thorsten has just informed us of the latest news in this dispute:


"You may recall my short comment on the author’s rights dispute revolving around the Stuttgart terminus station. Well, on 9 November the last word has now been spoken by the Federal Court of Justice (Bundesgerichtshof). 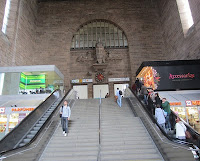 The Stuttgart 21 project (turning the railway terminus into an underground through station) had led to an author’s rights dispute between the owner of the terminus station and buildings, Deutsche Bahn AG, and the grandson of Paul Bonatz, one of the author-architects of the terminus building. The project required the destruction of both side wings of the terminus, as well as the grand staircase leading to the station hall. The author’s grandson, Peter Dübbers, sought to protect the author personality rights of his grandfather which he regarded as violated by the partial destruction of the original building. The remedies he pursued with this action were reconstruction of the north-west wing, and cessation of the imminent destruction of the south-east wing and the grand staircase (for a more detailed treatment of the legal arguments, see my earlier Current Intelligence note).

Having lost in both instances, the last throw of the dice was an appeal against denial of leave to appeal (Nichtzulassungsbeschwerde) before the Federal Court, since the Stuttgart Higher Regional Court (Oberlandesgericht) had refused leave to appeal.

On 9 November the Federal Court confirmed the decision by the Higher Regional Court and dismissed the appeal by Mr Dübbers. An appeal to the Federal Court would only have been in order if the legal issue was of fundamental significance, or if a decision was necessary in order to develop or ensure consistency of the law. The decision of the lower court was regarded as free from errors of law; in addition, it did not raise issues which had not been dealt with sufficiently by prior Federal Court jurisprudence. Accordingly Mr Dübbers’s case was without legal foundation. In Dübbers’ view the case did indeed raise a fundamental legal issue, namely in respect of the significance – and arguably the gradual lessening the value – of author’s personality rights. However, the Federal Court did not agree.

This brings an end to the legal action. It follows the political decision taken by the people of Baden-Württemberg on 27 November in a rare referendum to continue with this polarising project".